In 2015, IDO completed the first design hotel (called Munwood Lakeside) in Dali, China, in collaboration with Chongqing Hexin Architectural Design Institute. We played a dual role in that project since we were our own client. We participated in all stages of that project, from planning and site selection to design, construction and operation. In the same year, we started the design of Munwood Panoroma, which is the second hotel of Munwood series, located on the east bank of Erhai Lake. The feedbacks received from guests on Munwood Lakeside gave us references and impetus to approaching the design of this project.

Considering that Munwood Lakeside enables guests to enjoy sunrise on the bed, we hoped to create a different experience for them in Mundwood Panorama, and so took "sunset" as the key word for choosing the site. Finally we decided to locate the project in Wenbi Village of Haidong Town, which directly faces the Cang Mountain, Dali Ancient City and Three Pagodas of the Chongsheng Temple and is a perfect position to have a panoramic view of Erhai Lake. We named the hotel "Panorama", indicating that it provides an open view to the surrounding landscape.Wenbi Village features a cluster of architectures on a sloping land.

We selected two local dwellings with yards for building the hotel. Covering a land area of 1,666 sqm in total, the original two architectures are respectively situated on the foot and middle of the slope, with a big elevation difference that is nearly the height of four storeys. Based on the principle of low-cost, we chose to work on the transformation via "subtle interventions", so as to better let the architectures blend with the built environment of the village.

We firstly rearranged the functional spaces of the two original buildings — the upper block and lower block. The lower block is formerly a two-floor farmer's house, constructed with bricks and concrete. We added a third floor to its roof to accommodate guest rooms. Besides, we also built a L-shaped steel-structured volume on the ground, which encloses a courtyard-like space with the building already existed and functions as the reception & dining area.

The upper block is formerly a two-and-a-half-storey rectangular local dwelling, also built with bricks and concrete. We completed the third floor space by following the original architectural structure, and at the same time added three guest rooms with big terraces on one side. In this way, the architecture was given a new "L"-like shape, and a semi-enclosed yard was formed, with a borderless pool as the highlight.

On the north side, we newly built an independent guest room area. It is made of a steel structure, so we call it "steel hut". The reason that we chose to adopt a steel structure is that we hoped to express the spatial relationship between the old and new, present the differences at construction and typology level, and make it more identifiable.

The public spaces are continuous and situated at different elevations, thereby forming a circulation route for guests along which they can enjoy varying views at every step, and also generating multi-dimensional interactions between people and landscape.

We created a public terrace on the roof of the lower block, which is equipped with a borderless pool and a relaxing seating area. Taking the elevator upwards from the reception lobby, the guests will reach this rooftop terrace, on which they can overlook the Erhai Lake and Cang Mountain and establish a dialogue with the natural scenery. 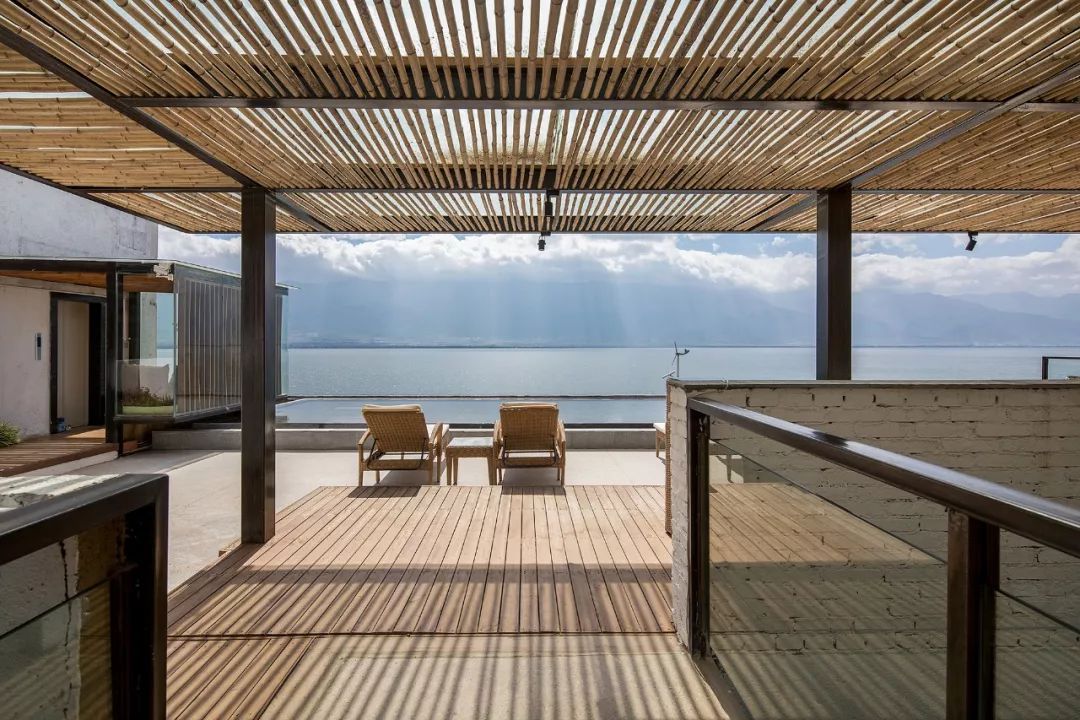 And then, they can arrive at the upper block area after passing through a steel bridge that stretches across a small cliff and ascending the stairs. The yard of the upper block also has a pool and allows the guests to enjoy the panorama of the charming lake and mountains. The sunlight and winds vary in different seasons and at different time throughout the day, which enriches the guests' experience.

Panorama Resort has in total 23 guest rooms of 11 different room types. The idea of connecting to nature was incorporated into the interior design of every room type. Taking the guest room 601 as an example, the design took an unconventional path by dividing space area equally between the bedroom and bathroom. The bathroom area is combined with an indoor garden, creating an illusion of being outside and providing a unique bathing experience. On the other hand, the bedroom area faces the Erhai Lake, and the window near the tatami frames the outdoor landscape. 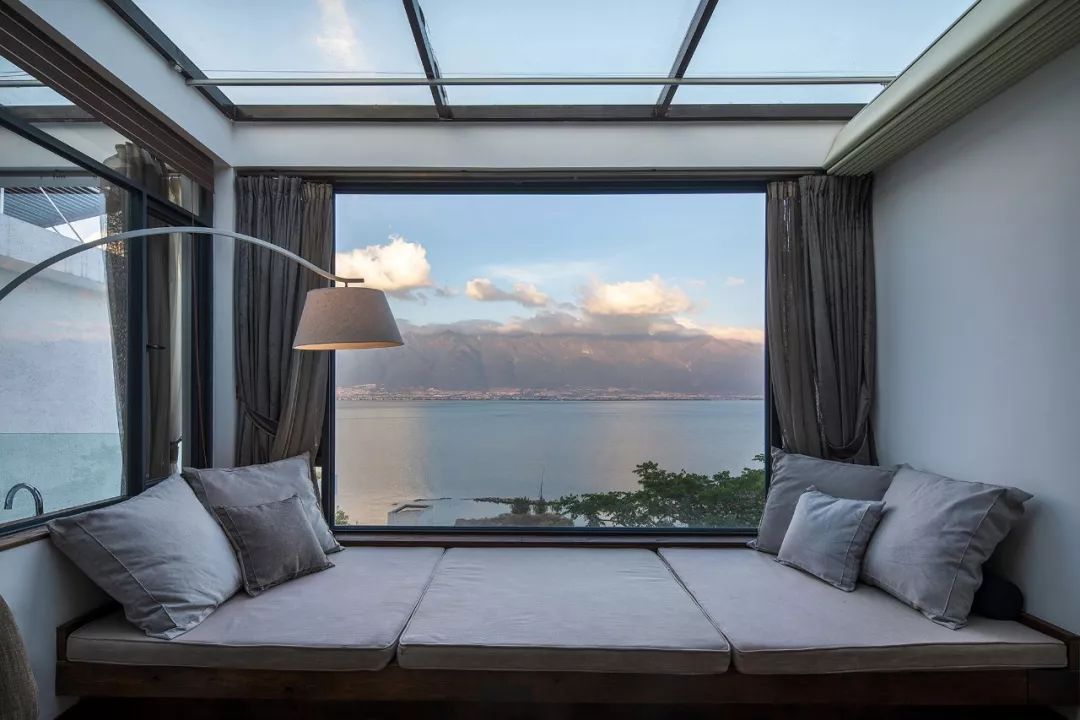 Another example is the guest room 606. Its bathroom is placed beside the bedroom area, with the bathtub situated next to the exterior window facing a reflective pool. Seen from the bathtub, the pool seems to connect with the Erhai Lake, forming a "closer" interaction between the lake and the guests.

For the guest room on the 5th floor next to the borderless pool, a transitional space was specially set up in consideration of privacy. The wooden gratings in this area forms a "frame" with a sense of depth, which combines the pool, the Erhai Lake and the Cang Mountain in the background into a "landscape painting".

The steel hut is located on the northernmost side of the upper block. The site is narrow, long, and trapezoidal, which is about 21 meters in length. From south to north, the width gradually decreases from 6 meters to less than 3 meters. Besides, the site slopes downward from north to south, with an elevation difference of 2.5 meters approximately. Facing the cliff on the west, it provides the guests an open view to the Erhai Lake and Cang Mountain at a distance.

In addition, on the east side of the site, there is a retaining wall about 2 meters high, above which is a public path of the village. The site of the steel hut was once the main passage for the dwellers of the upper block to enter and exit the village, but it no longer serves that function since the merging of the upper and lower blocks. We hoped to make use of it to build an independent guest room area with a communal space and two guest rooms, and so we carried out a construction experiment and exploration on creating an efficient, comfortable and experience-focused vacation space on a limited site area.

In view of the limited area and irregular shape of the site, we decided to arrange the flank walls of both guest rooms on diagonal lines, which splay outwards. In this way, the guest rooms have a wider view towards the Erhai Lake, and several 'inverted trapezoidal" spaces were "cut" and left on the site, which were converted into a washroom, kitchen and public staircase hall. Such way of spatial division, combined with the split-level design based on the gentle slope, embody Louis I. Kahn's concept of "Served Spaces and Servant Spaces": with staircase hall, kitchen and washroom as "servant spaces", and guest rooms and the public living room as "served spaces".

After figuring out the spatial order, we wanted to make the structural order integrate with it, and let the three "servant spaces" together constitute the structural supporting system. Considering the economy of the structural system and convenience for construction, we adopted small rectangular steel tubes to form grid as the main supporting structure.

Due to the large gaps left between the steel tubes, light can make its way in. Therefore, this structure is different from the conventional "grid" in a sense, but more like a "light filter". When guests move inside the steel-structure "light filter", they can feel the interaction with nature. Especially at dusk, they can see the sunlight from the west penetrating through the gaps of the steel grid and illuminating the stone wall. Light and shadows were utilized as unique "construction materials" and incorporated into the architectural space. The steel hut is essentially a construction experiment focusing on the experience of nature.

On the east side of the steel hut, there is a retaining wall and a village path higher than the site. Based on this, we built a reinforced concrete wall for the hut, and then clad the interior-facing side of the wall in local stones, therefore creating a unique backdrop wall with a holiday atmosphere. All the switches, sockets, fireplaces, AC units and cabinets were placed in niches embedded in the stone wall, and by doing so ensured its integrity.

The roughness of the stone wall, the warmth of the wooden interface, and the exquisiteness of steel, present the variety of material textures, and generate a unique spatial ambience. The design of the steel hut reflects the rational relationship between structure and space, and its material selection and construction show a clear logic and respect to locality.