A special kind of structure, a pontoon bridge is a bridge which floats on the surface of water. Usually without large-scale underwater fixed components, most of them are for temporary use, mainly only for people to pass the water. The "floating pier", a short-term installation designed by the couple Artists Christo and Jeanne-Claude on Lake Iseo, northern Italy in 2016, and Copenhagen Islands, a group of floating islands unveiled by architect Marshall Blecher and Studio Fokstrot, are the kind of completed pontoon bridge which combines design, function and art, rare to be seen. For us, the project of pontoon bridge was an interesting and challenging experience.

The design required "creative design at low cost", breakthroughs and trials of new forms and materials, and a ten-year life cycle and a later detachability. In addition to a strictly controlled cost, we had to face many issues such as a necessary rich form of the design of the pontoon bridge, additional functions other than passing through, and the ways to connect the revetments which need to be dealt with due to changes in water level. Challenges came before fun.

The whole design process went through around three stages, during which the concept was constantly developed and optimized, with every step playing a significant role to the final reasonable completion. 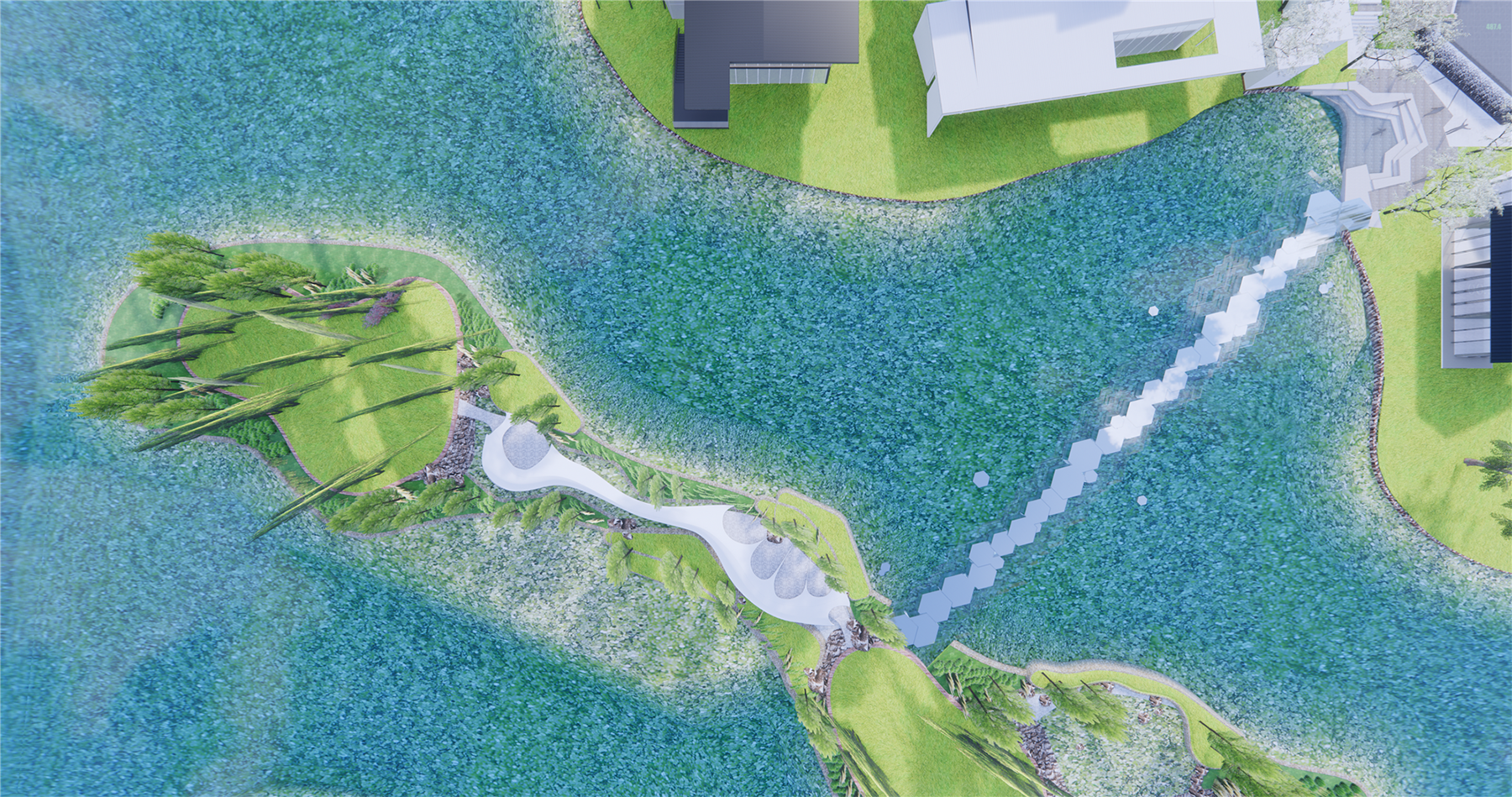 In order to differentiate from the edge curves of islands and "Chengdu Rainbow Hut", and achieve the expression of pixelated reflection of the sky, we selected four or five scales of regular hexagons to realize link of combination and superposition occlusion for the matrix with small staggered oscillations on an axis. On material, sand-blasting and embossed stainless steel was chosen to reflect the sky with a quality of skid resistance. The hydrophilic area is partially perforated and water-permeable, getting rid of buoyancy.

In view of structure, the bridge body was initially divided into three parts: the middle section, the starting section and the ending section, and then different situations under pre-buoyancy or not were discussed; Three methods of docking transfer were proposed, one of which is to connect the near-shore hexagonal blocks with vertical slide rails, and adjust the buoyancy through the water storage within the blocks, so as to obtain a suitable relative height to function as steps, to match the height difference caused by the change of the water level-during the dry period, from the slight superimposition of the masses and gradual changes in the middle section to the significant staggered of the off-shore, while in the wet period, the whole is relatively flat. In this way, the pontoon bridge obtained a dynamical change in accordance with the seasonal rise and fall of the water level.

Due to the cost issues and the fact that functional forms were still dominated by passing by, we begun a new journey of exploration: if it can't be completely hidden between the water and the sky, why not dissolving into the water island environment in a natural form of clusters. In this way, seven islands of different sizes, covered with green vegetation and full of natural forms were nicely scattered in the water. The near shore islands can naturally solve the problem of water level difference by crossing the slope; and the islands were connected by submerged trails. But if you don't want to experience the wading path, you can also drag the rope by the inflatable rafts to reach each artificial island. We have a dual way to pass and get close to water.

The islands were equipped with spaces of fishing, picnic, resting and so on, combined with light strips and spray devices to outline and enhance the atmosphere; at the same time, they echo with other artificial islands to form a linked archipelago, which together constitute the water island landscape, entitled with A Cluster of Artificial Islands and Pontoon bridge by us. However, since the design of LUXELAKES already had the concept of outlying island chain, we proposed to replace the natural form with the hexagonal form in the original design to satisfy the multi-nodes stay and maintain the contrast with the existing natural landscape. 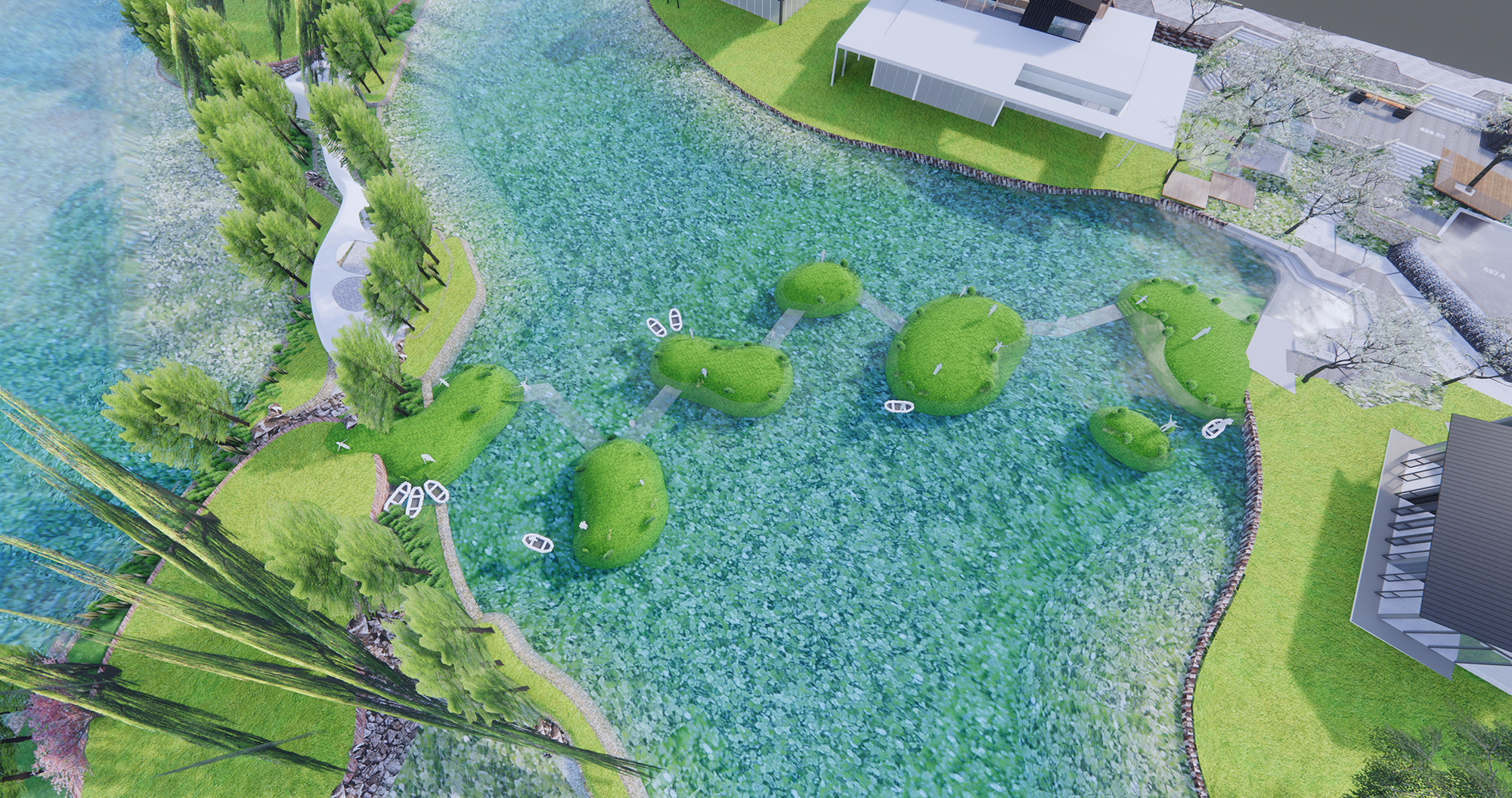 After the above two rounds, final direction of combining the two proposals was clear and confirmed, and basically all the required technical means and solutions were accumulated. At this point, the regular hexagon was no longer suitable for an independent and scattered layout. Therefore, the sides of regular hexagons were further stretched appropriately with true north layout. All floating islands were appropriately sized with proper intervals from each other, achieving integral rhythmical distribution.

The footpaths, which were parallel to the edge of hexagonal islands, further strengthen the overall connectivity and molecular-like spatial structure. Furthermore, controllable air cushions might be used to control the elevation of footpaths. With an addition of a rope raft route, there were three means to access the islands: above-water path, water treading and waterway; Meanwhile, common methods of using plank paths to connect the revetment became less primitive or obtrusive.

All islands were designed in a targeted manner to ensure their wavy form of the surface of natural islands in addition to rich water-related features; through adoption of multiple means, reflective materials, hydrophilic vegetation and hill form, there was contrast and combination between natural and artificial landscape, whereby this principle was adequately followed from overall layout to all details of islands.

Ultimately, the layout and functions fully satisfied design demand, except the addition of a swimming area after water quality standards were met. In order to save the cost of construction as far as possible, and to meet the size of water area, the scale of the two main islands was further reduced, and the relative position as well as texture of the islands was adjusted. Besides, we not only reduced the water-wading hydrophilic area and concentrated it around the swimming area, but also used a tiny floating island powered by a pair of manual propellers to replace the rope kayak, making it a movable floating island. 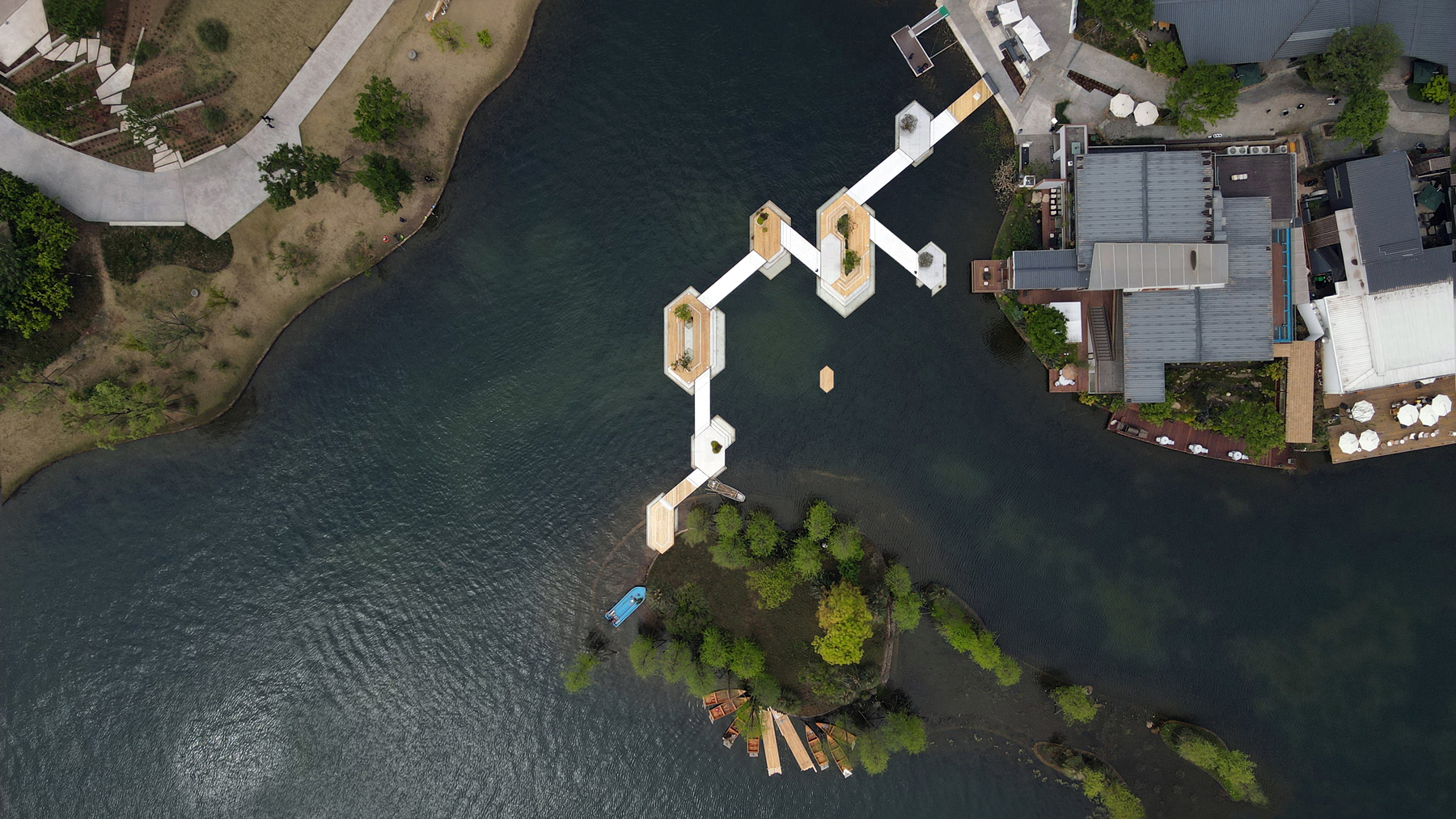 We look forward to presenting a place subtly with wonderful landscape, creating a special flavor of fun for people while walking. The pontoon bridge will be partially invisible between water and sky with a supply of practicability and fun. Walking on the clouds reflected in water, visitors will develop a sense of freedom of floating and an inside surging strength. We expect that these artificial floating islands can merge into the sky and lake in a new form, creating effect of a cluster of folded islands, accompanied by Rainbow Hut, and dwelling in LUXELAKES.

Under our conduct of the entire construction process, the Floating Islands of Sky has been basically completed in the middle of the year. During the process, we made lots of simplified and practical details and constructions, all of which satisfy the dynamic lifting demand for bridges that connect the islands and consolidate the entire system. Furthermore, islands of different sizes were aligned to the same elevation with bob-weight, even though the density of preservative-treated timber and steels whose local parts may contain air cannot be determined accurately. At the same time, the availability of splicing in future renovation was also studied, and we have designed the 2.0 version of the Floating Islands of Sky. Up to now, we have taken down one branch for experiment, and for the rest main pontoon bridge, its shape and form will be changed again after a use period, continuing to become a dream place for people to get close to the sky and the lake. 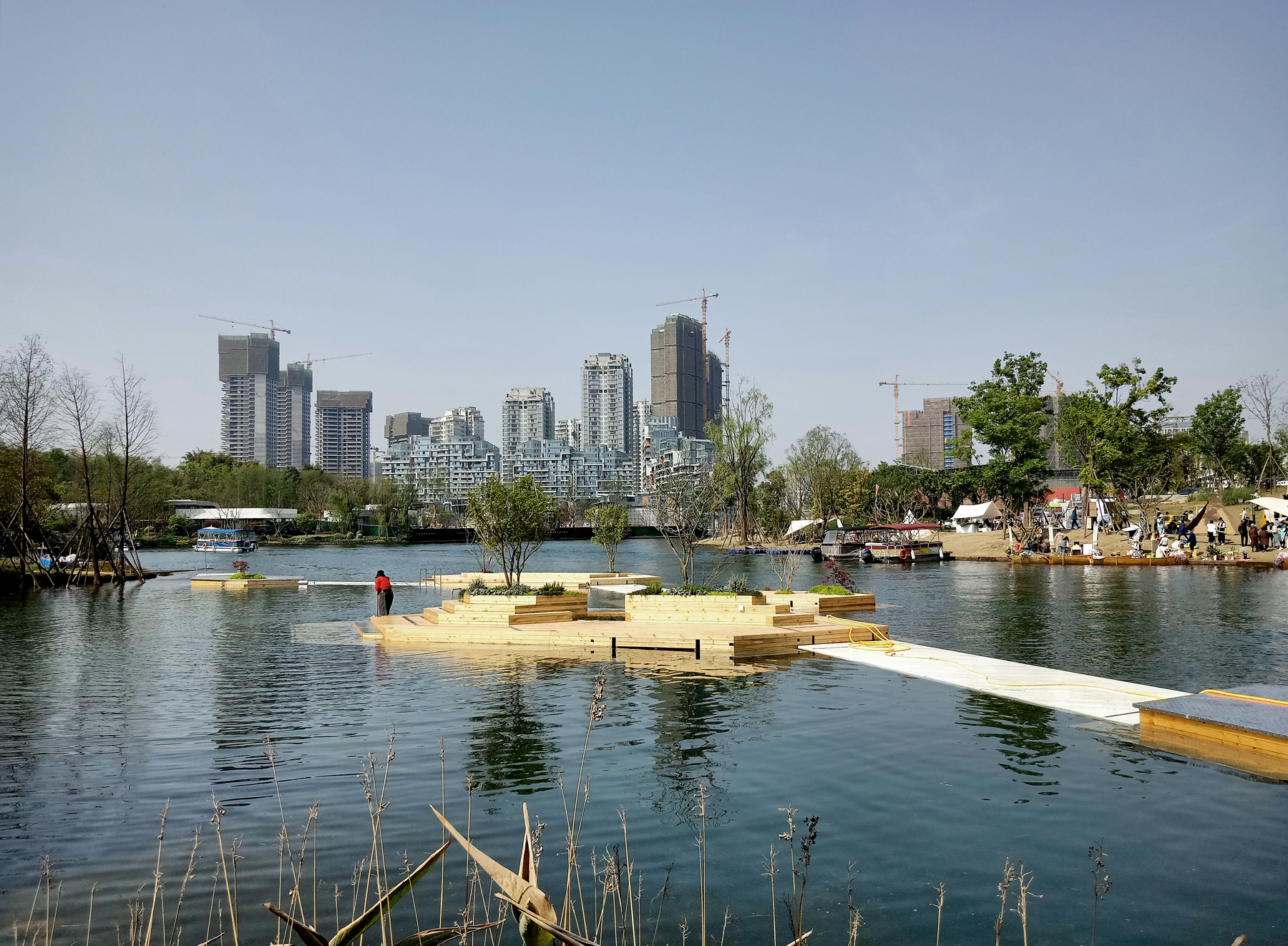