The clients are a large family including several generations, all of whom are doctors.

The grandfather told me a story from his childhood; how his maternal grandfather was a monk of Lingyue Temple in the mountains, who was responsible for treating the surrounding mountain folk. He once visited their home and brought with him three medical books as a gift. From that point on he was fascinated with medicine, and after several years he became a university medical student.

I suppose this experience, carried on through the generations, may have created a certain family character, which was expressed upon our first meeting together where the young couple said they preferred bright spaces rather than dark corners.

The Taihang mountain range was an important front during the Second World War in China. Junxiang village was occupied by the Japanese as a military base. After a large fire, this courtyard was rebuilt by the invaders as a temporary wartime prison.

After the war, the government returned the house to its original owners. A home became a prison, and the prison turned back into a home. Afterwards, the entire family moved to the city, and the traces of lives from different eras remain.

The new building was quite special, as a single sloping roof with lower eaves faced the outside. Although surrounded by natural beauty, the yard was enclosed by high walls and deep shadows, and as the only place which received any light, the circling houses were shrouded in darkness.

When we visited the site in summer, although all buildings were in various stages of decay or had collapsed entirely, plants grew wildly in the yard and under the high walls and shadows. We could feel there exists a very special sense and atmosphere.

After being completely abandoned by the owners for several years, the houses would be rebuilt as a vacation home and guest house. However, the existent condition of the site was far different from what was imagined by the clients.

The most straightforward method in renovating the site was to demolish the existing environment and construct a completely new one.

But from another prospective, the profile of Castel Sant'Angelo del Tiber, also a prison, reveals a different message, as successively a mausoleum, a prison and a castle, where the high walls also provide a certain shelter and security at the same time.

Whether in reality (Castel Sant'Angelo) or in fantasy films or television (season 4 of Walking Dead), within a world in crisis a prison could also be a castle and shelter.

It would be quite regretful to completely make vanish the unique spatial scene, cutting off the memory of the land. So the design became a "prison break" while maintaining the characteristics of the site. On the ground, we added new rooms as connectors to create new orders.

Above, three new structures were attached to the old building's roof and on top of those high walls. They are parasitic organisms, titled: "basket", "suitcase", and "cabinet", providing natural light and fresh air on the ground, as well as views and activities on the roof. In this way, the courtyard behind the high wall reconnected to the nature and surrounding fields.

The space between the corners of the courtyard and the existing buildings is the first to be occupied, and the separate areas on the first floor of the new building become a "coherent whole". We opened the facade facing the inner yard, with large planes of glass taking the place of brick walls and wooden frames.

The design attempts to create a new system buried beneath the high walls. The light that passes through the skylight changes throughout the day and is reflected between the white walls though a succession of places, bringing forth a rich environment of shadows and light. Even though the high walls remain overhead, the darkness turns into shifting shades of grey and the brightness of the large space follows.

In this continuously changing space, public spaces are located in the middle. Bedrooms are arranged in quiet corners at the far end, or on the second floor. The corner bedrooms enjoy their own yards. The second floor bedrooms are set back from the high walls and receive plenty of sunlight and views toward the mountains.

The original entrance of the courtyard is in a remote corner. We opened a new one on the wall by the Hutong of the south building. Guests can directly enter the interconnected interior.

In addition to its function as a lobby, a row of sliding doors to the south conceals storage, an equipment room, a laundry room, and a stairwell leading to the second floor. 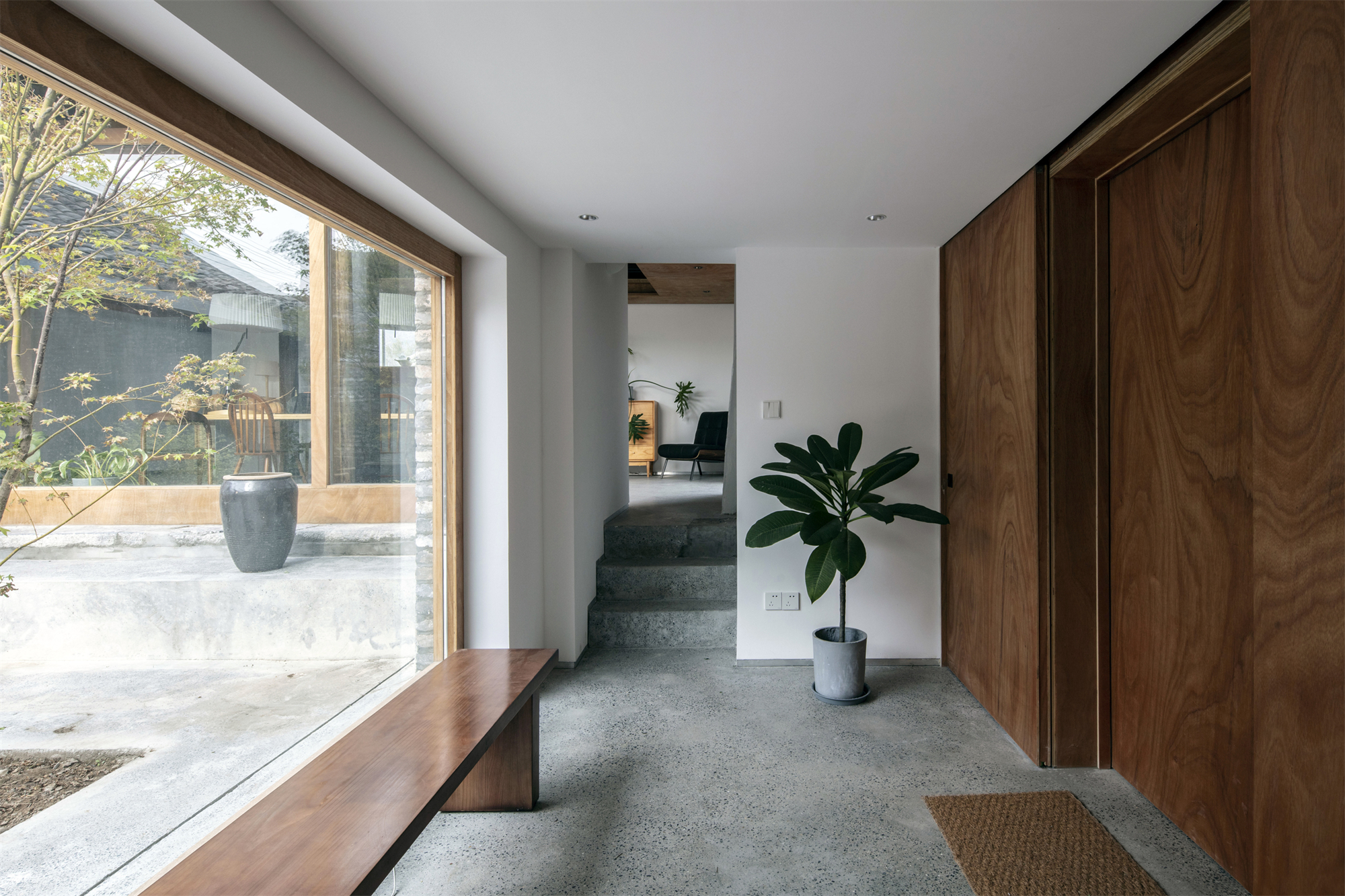 The "suitcase", rises backwards from the top of the original high wall on the north side. With a distance from the ground floor public spaces, it is a guest room with a far view. 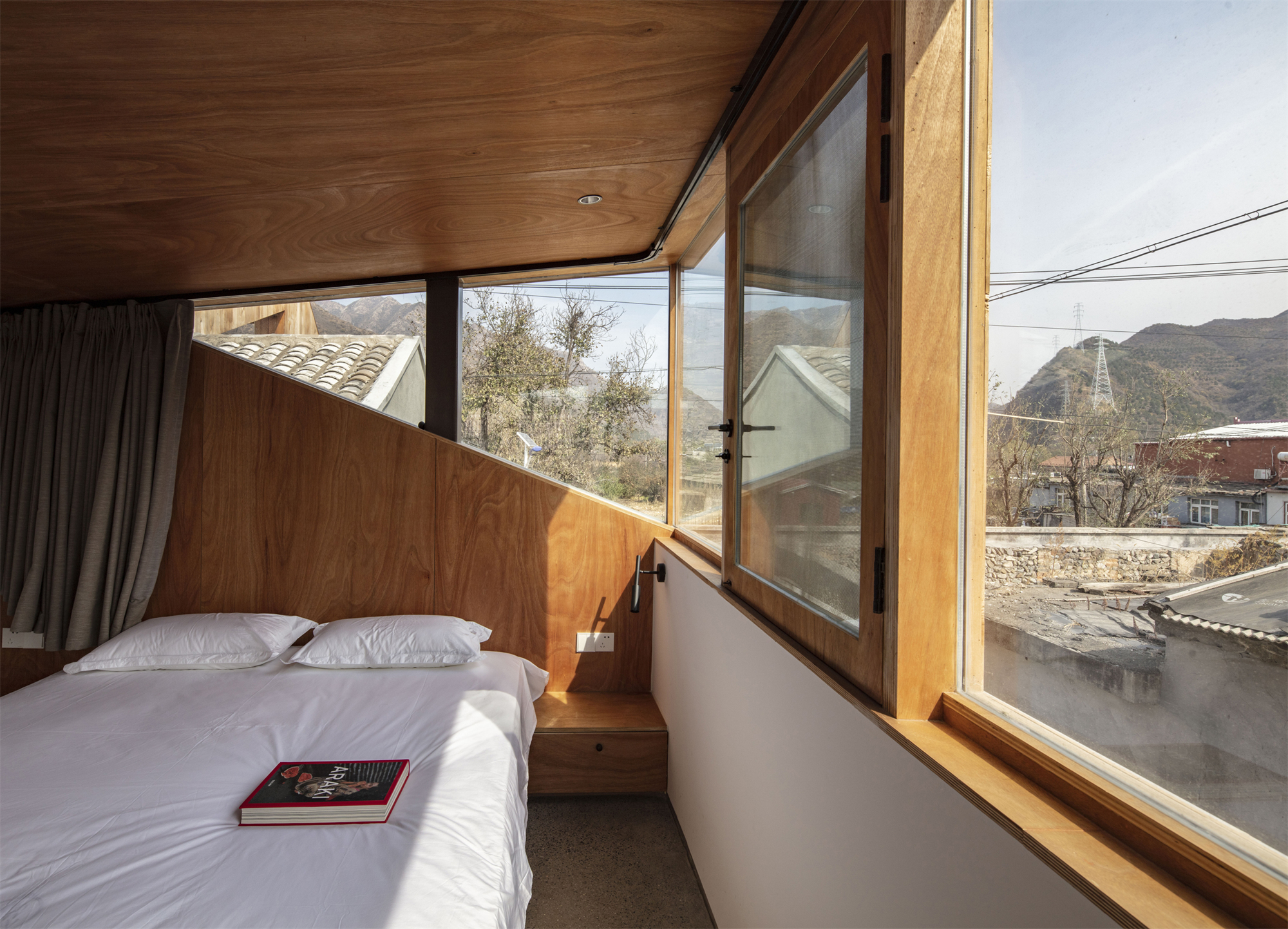 Turning right and entering the west building through a corridor, this is the core site of public spaces. The large dining room has the best view of the courtyard and is well connected to the rest of the building. 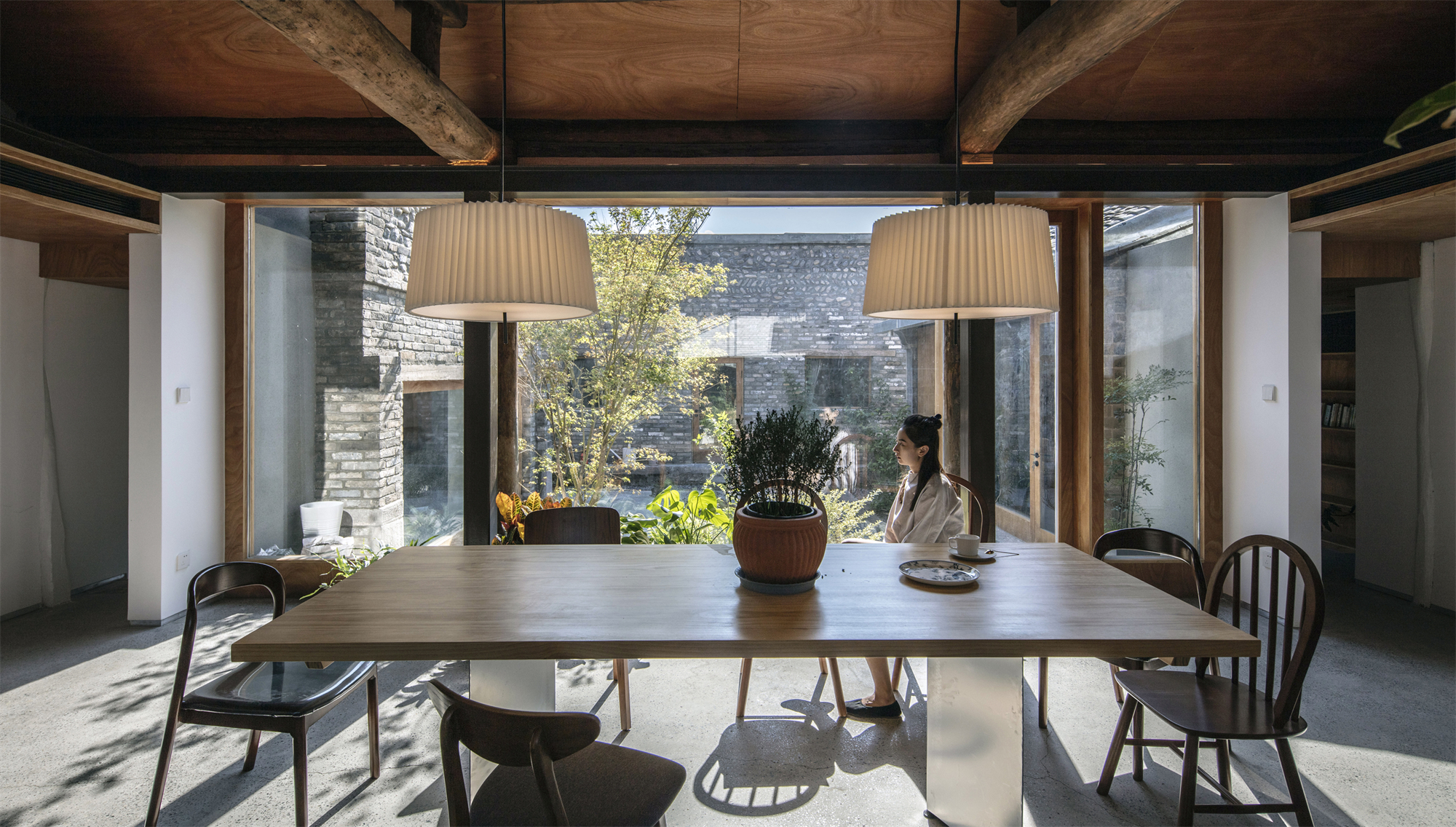 The site over the east wall becomes an extension of the building, with an open kitchen under a high window looking over the street. 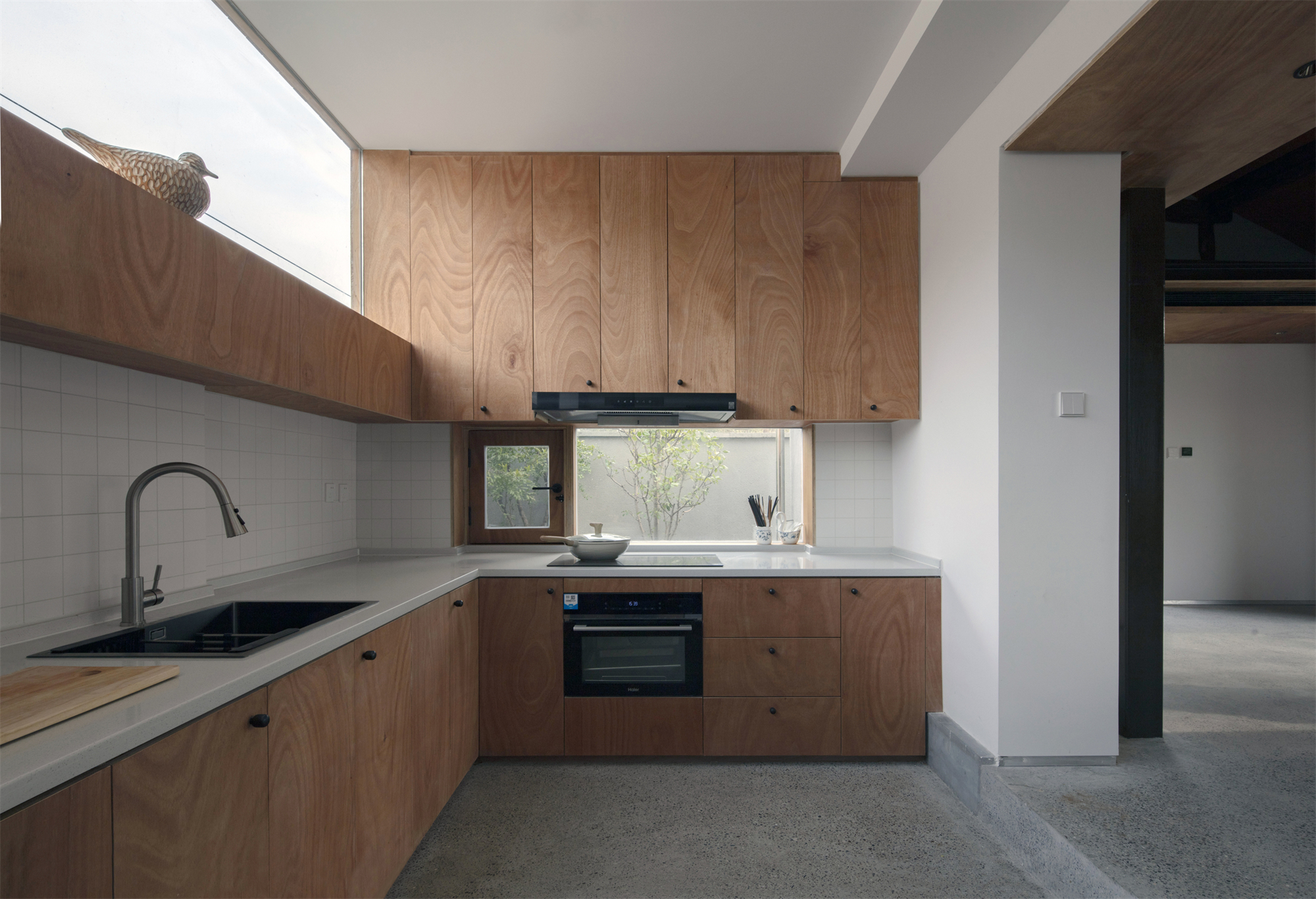 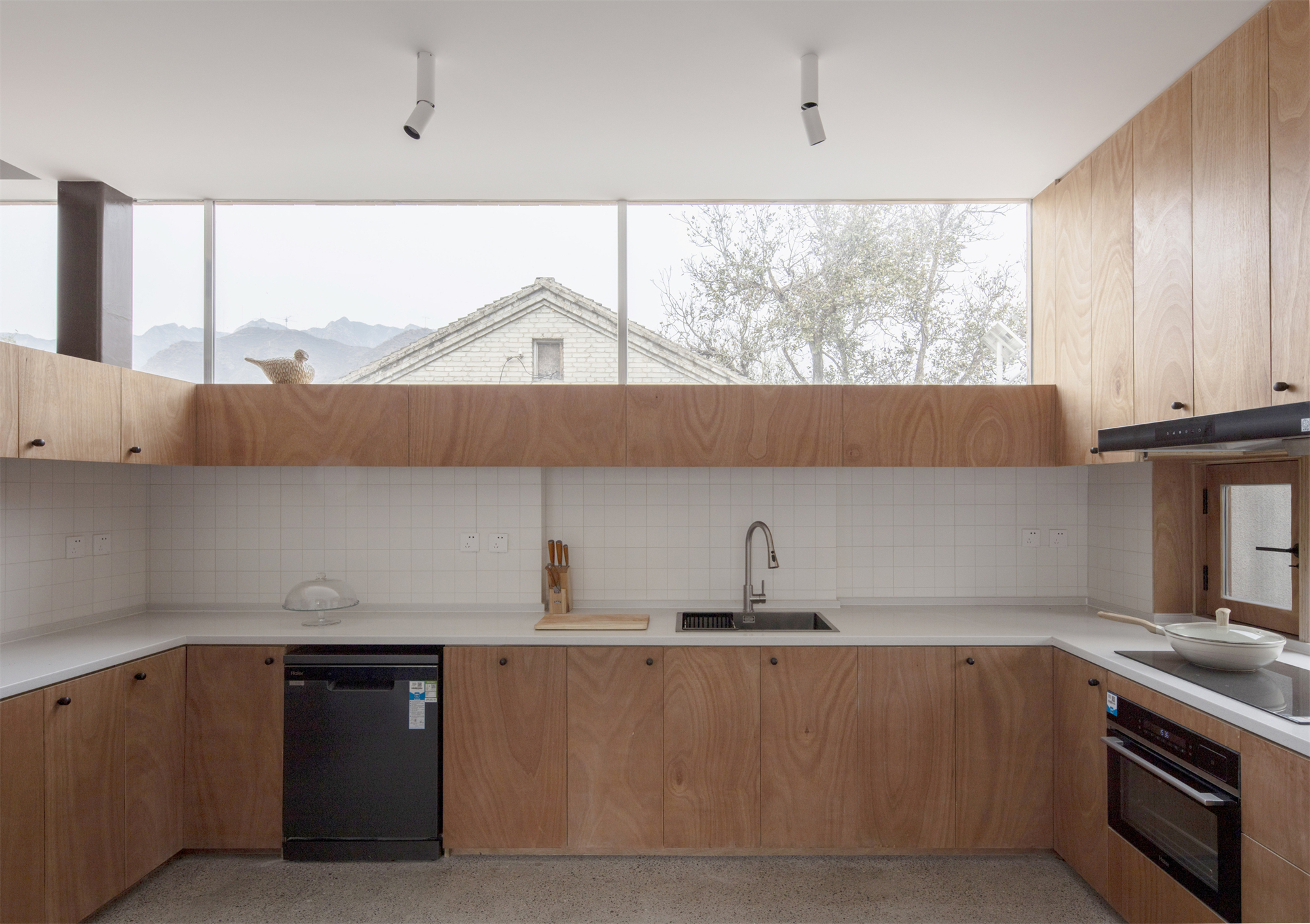 A staircase leads up to the roof. The steel structural "basket" lies on the roof of the original building. The old roof, which has been occupied, expands the limited area of the roof terrace. The slope has been transformed into steps, with a long polished concrete table facing eastward towards the mountains and fertile fields.

People standing in the inner yard cannot observe the addition of the "baskets", but can see people moving around on the roof.

The side of the steps appears as a glazed light strip. The old wooden structure on the ceiling is rescued from the dark shadows by skylights. At night, the light also spills out onto the roof from these same skylights.

The north room is directly connected to the east room and, as the most ancient member of the courtyard, that was once spared from the war, we simply replaced the rotten wood pillars, re-roofed the house, pushed back the neighboring building that had tilted to the east and kept the rest as original as possible, functioning as a complement to the large dining room, small library, and tea room. The west building located at the other end assumes a versatile function. On the one hand, the first floor is used as part of the public space, a movie room. The "cabinet" can also be used as a temporary bunk room when there are guests staying overnight.

The budget was quite limited. Based on photographic documentation, we recreated the original brick and stone facade. The old gatehouse, screen wall and all brickwork on the face and roof of the north building have been preserved.

In contrast to the coarse texture of the old building, the new addition has a lightweight steel structure, large expanses of glass and red cedar veneer.

The interior furnishings are uniformly made of cheaper willow eucalyptus plywood on site, and the floors are finished in polished concrete. The steel structure is relatively voluminous and was quick to construct, responding to the complexity of the sites' original state. 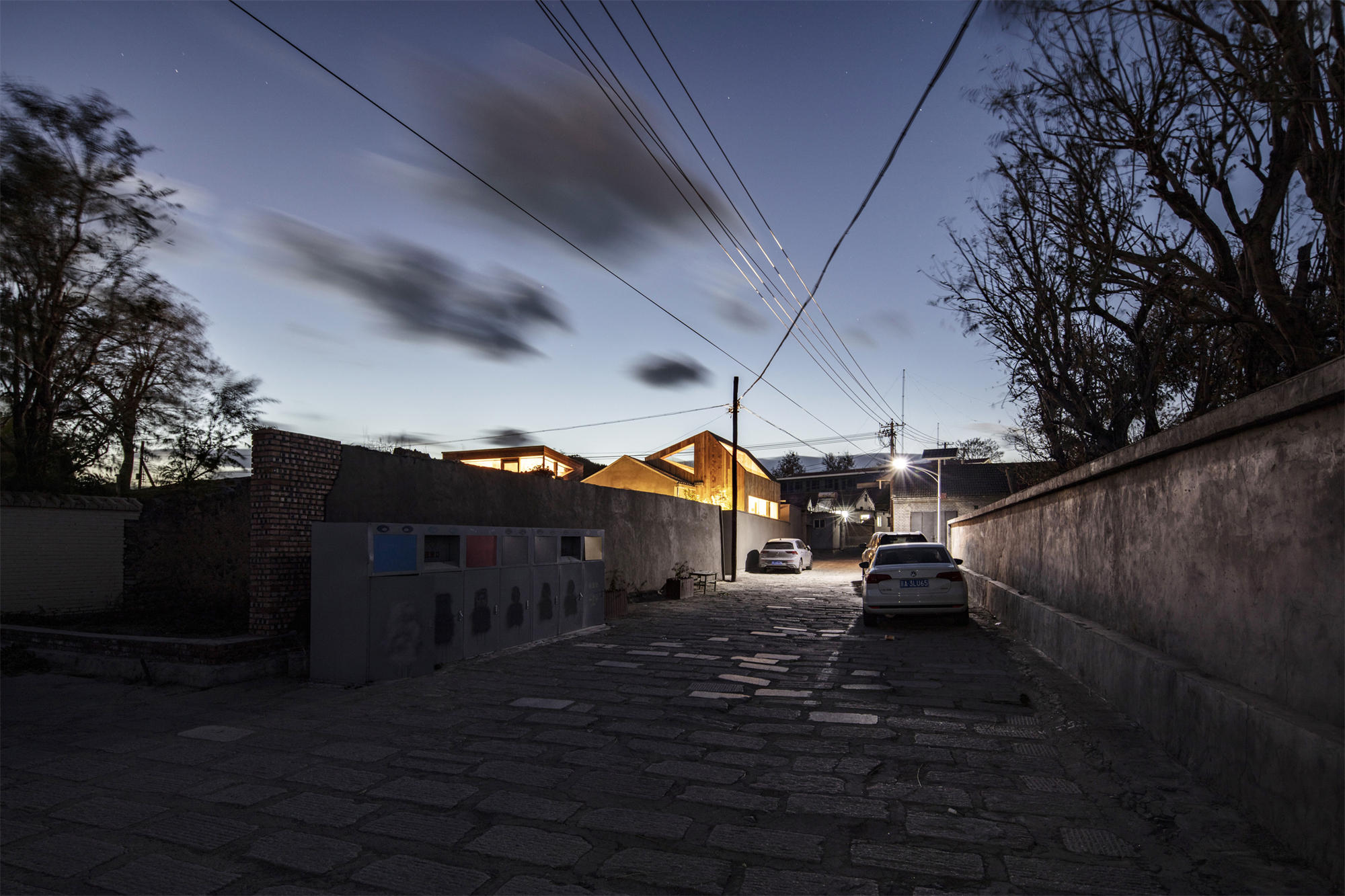 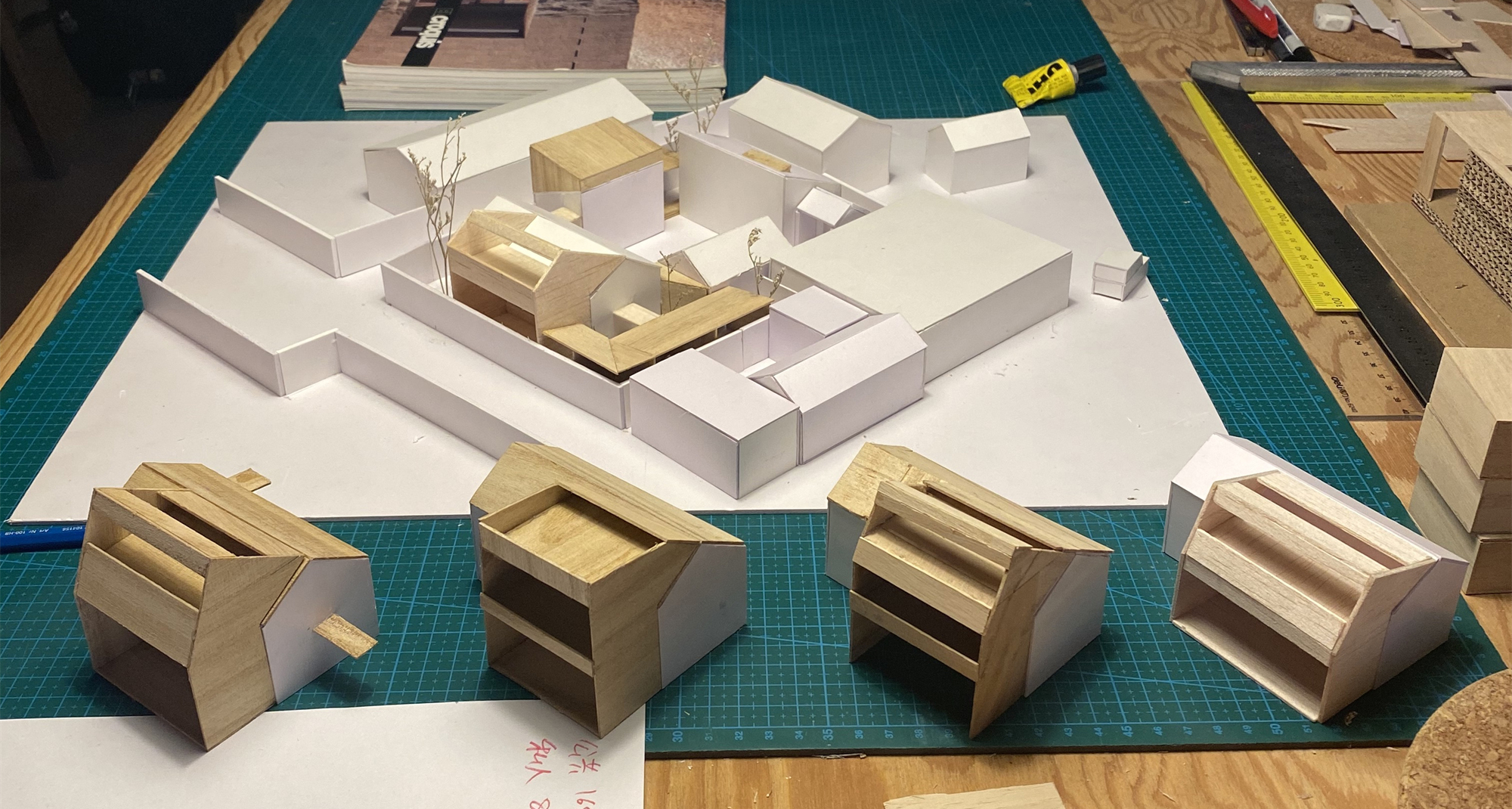 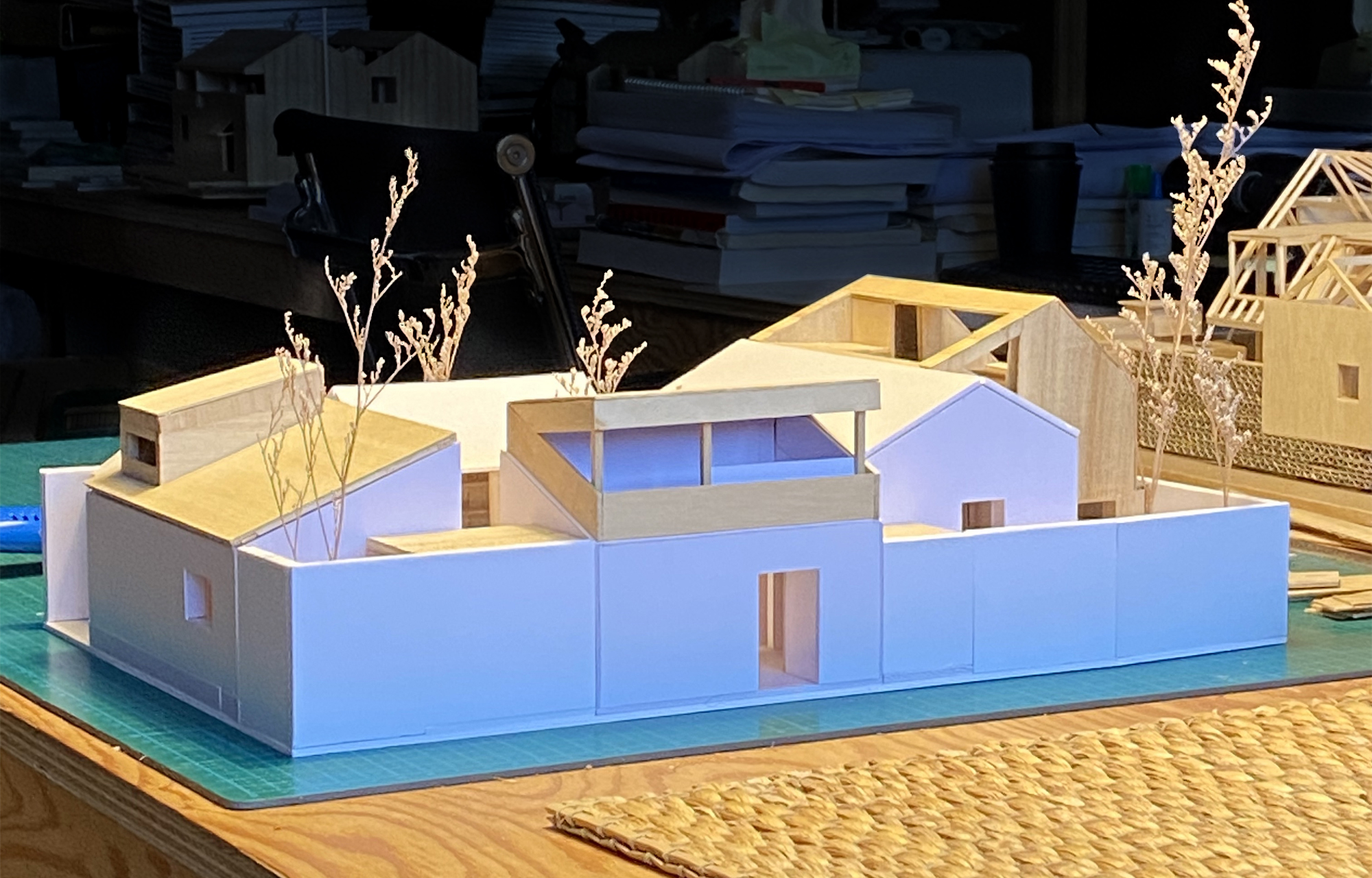